It is not the usual blank menu! 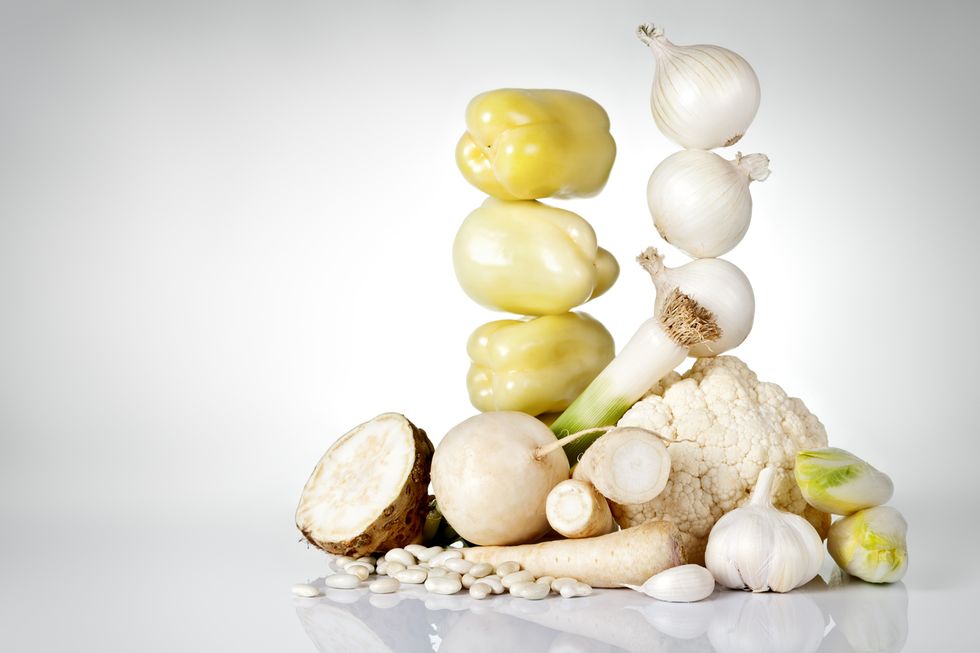 It is the color of the end of winter, even at the table because in this season the roots, fruits and white vegetables ripen, which are perfect when it's cold even if spring is already peeping out. Let's see why

It is probably the least attractive of the five colors that nutritionists divide fruit and vegetables into based on their nutritional intake. Certainly the "icy" white does not stand up to the perceptual comparison with the vitality of red, the magic of purple, the naturalness of green and the joy of yellow. But if we talk about nutrition, then white has nothing to envy to other colors. Indeed, at certain times of the year (such as winter) it even acquires an advantage over other colors. Let's see why. White-fleshed fruits and vegetables have specific effects on wellbeing: they regulate blood cholesterol levels, strengthen the bone system and lungs. But above all they are very effective in the prevention of gastric cancer: a study has shown that a high consumption of white fruits and vegetables reduces the risk by 33%. Also, eating white fruit regularly (such as apples and pears) cuts the risk of stroke in half. These benefits are due to the pool of substances typical of white fruit and vegetables, which act in synergy: they are, in particular, potassium and vitamin C, polyphenols and flavonoids with antioxidant power.

The natural "dye" of white fruit and vegetables is quercetin, a flavanol that helps the body fight allergies and inflammation, acting as a natural antihistamine. Recently it has been discovered that it prevents inflammatory states, cardiovascular and oncological diseases, because it has a potential chemopreventive activity, that is, the ability to block the process of transformation of a normal cell into a tumor or to revert it if it is already in place. Quercetin also promotes the absorption of vitamin C and acts as an antioxidant. Among the "whites" they are especially rich in garlic and onions.

They often work in association with vitamin C, increasing its utilization by the body and its effectiveness. Powerful antioxidants have gastroprotective and preventive functions against tumors. Fennel, apples and onions are especially rich in it. The flavonoids of apples, in particular, help prevent cancer and maintain the functionality of the lungs, while those of onions have the peculiarity of intervening in the mechanism that regulates the loss of calcium in bone tissue.

These phytochemicals prevent cellular aging and eliminate estrogen responsible for many forms of cancer, preventing cancers of the digestive system, lungs, ovaries and breasts. You can make the most of it by giving preference to cauliflower among white vegetables.

These aromatic substances, which give perfume to garlic, onions and leeks, inhibit tumor proliferation and have antibacterial activity, especially against Helicobacter pyroli, which is related to stomach cancer. Furthermore, the sulfur compounds protect the body from coronary heart disease, make the blood more fluid and prevent the formation of thrombus.

It protects the bone tissue, prevents cardiovascular diseases and hypertension. It is also useful for the line, because it has a natural diuretic action that stimulates the body to eliminate water and sodium with a purifying effect that increases the functionality of the kidneys and intestines. Among the white vegetables, garlic stands out for its potassium content, followed by fennel and cauliflower.

In addition to having an antioxidant action, it protects against the aggression of viruses and bacteria. Cauliflower has the record of vitamin C among white vegetables: it provides 59 mg per 100 g, against 32 mg for celery and 12 mg for fennel.

White vegetables are perfect grilled or au gratin: cooked in this way they represent an excellent dish because they are very satiating but provide few calories. The most frequent on Italian tables are fennel, which are harvested throughout the year but which reach the best quality in winter. Its advantage is that it combines a low caloric value with a wealth of fiber, vitamin C, mineral salts and phytoestrogens, which give it the ability to reduce intestinal fermentation, rebalance the bacterial flora and carry out a detox action on the digestive system. A winter vegetable that deserves greater consideration is cauliflower, especially in its candid versions, such as the snowball or that of Verona. It is one of the foods with the greatest detoxifying and antitumor effect, helps regulate the intestine and deflate the abdomen, and has only 25 calories per hectogram. Finally, leek: it is a balm for the respiratory tract, because the thiosulfates it contains have antiseptic and sedative effects, reducing asthma attacks, colds and sore throats. One more reason not to give up leeks during the cold months. And then, being rich in sodium, they also have an important antiseptic action in the digestive system and fight stomach acid.

2 white fruits to (re) discover

Among the white fruit the superstar role belongs to apples, which help prevent respiratory tract diseases, maintain lung functionality. The latest scientific studies have also confirmed the validity of the popular saying "an apple a day keeps the doctor away", since it is precisely by consuming at least 5 apples a week that the benefits in favor of the respiratory tract have been demonstrated. The mix of beneficial substances of apples is mainly contained in the peel: this is why it is important to eat without peeling it, after having carefully washed it with water and bicarbonate. Not to be underestimated, however, also pears, because they are a treasure chest of potassium and fiber, especially if they are eaten with the peel, in which nutrients such as vitamin C, most of the fibers and antioxidants are concentrated. Suffice it to say that a peeled pear loses up to 25% of vitamin C and phenols. In addition, pears are very satiating and are perfect as a hunger-break snack or in a salad with valerian and walnuts for a light lunch. Another advantage of pears is that they keep their nutrients for a long time: studies have revealed that the content of antioxidants (such as arbutin, catechin, chlorogenic acid, quercetin and rutin) is preserved intact for up to 8 months after harvest.