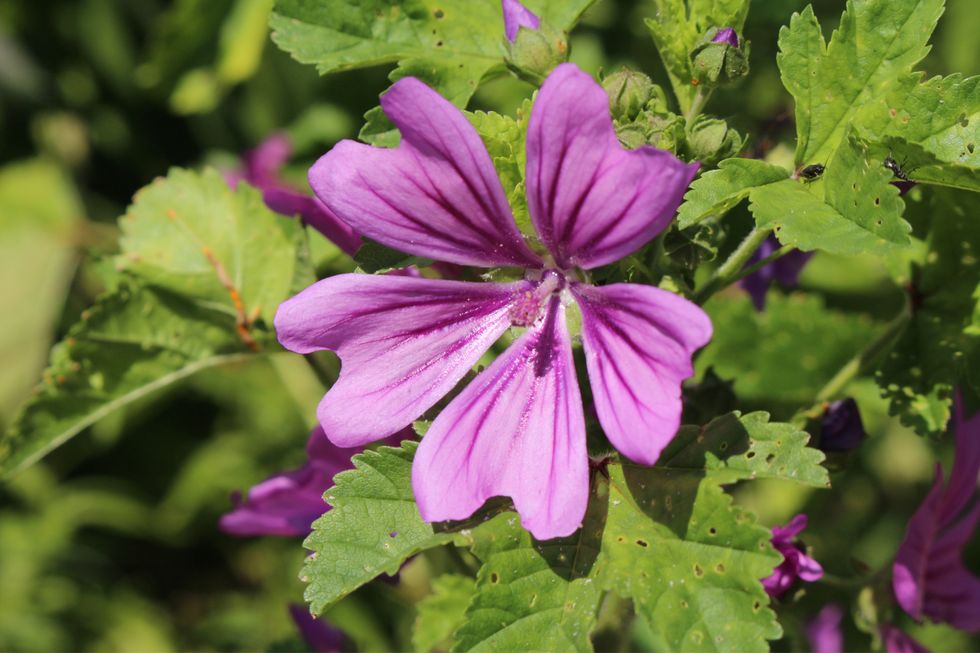 A prodigious plant with interesting soothing and anti-inflammatory properties. Let's discover its characteristics and give some advice on how to use it in the stove

A shrub with delicate lilac flowers that has important properties for our health.
It is Malva Sylvestris , more commonly known as Malva , a plant of the Malvaceae family, already appreciated in the time of the Latins, who gave it its name (which in Latin means soft precisely) precisely because of its emollient qualities.

In fact, Mallow is the remedy par excellence against inflammation due to the significant presence of mucilages (in addition to anthocyanins, potassium, calcium oxalate, vitamins and pectin) which defend the mucous membranes from the attack of harmful external agents - such as bacteria and substances irritants - because they act as a barrier, exerting a protective and soothing action . For this reason it is often used for all types of inflammation. From those affecting the oropharyngeal cavity and the respiratory system (including coughs and bronchitis ) to those of the digestive or reproductive system. Mallow in fact represents a valid help against annoying disorders such as vaginitis, cystitis, hemorrhoids but at the same time it is indicated in the case of the most disparate problems, such as irritation of the colon or constipation for its gentle laxative / purifying action .

It is the flowers and leaves that possess the healing properties; in general, especially for problems related to the stomach / intestines, it is recommended to use them in the form of an infusion to be consumed 2/3 times a day (the dose is one teaspoon of dried flowers per cup in infusion 7/8 min). But the infusion can also be used in less conventional ways: it can serve as a natural mouthwash in case of gingivitis , for expectorant fumigations in case of sinusitis.

The leaves can also be a useful complement in the kitchen , to embellish dishes of all kinds. As taught by Mariangela Susigan , starred chef of the Gardenia restaurant in Caluso (Turin) , who enriches her Piedmontese dishes with a great variety of wild herbs. The chef suggests “The flowers and leaves of mallow go very well with both hot and cold dishes. For example, minced and seared, they are well suited to "season" broths and soups . They are an excellent base for preparing hot creams and velvets . In general they are successfully associated with vegetables and cereals . Another idea in the kitchen can be the combination with risotto , always in association with vegetables, such as artichokes or burdock. If, on the other hand, we think of cold dishes, with mallow , together with other wild herbs, you can prepare delicious and fragrant flower salads . An interesting combination could be for example: mixed salad, mallow flowers, borage and calendula. A simple and delicious dish, with a very particular taste "

Prepare the ravioli dough: place the flour in a heap, break the eggs in the center, knead gradually collecting the flour. Knead the dough for a few minutes, wrap it in cling film and let it rest for thirty minutes in the refrigerator. Prepare the filling: clean, wash well and drain the nettle, mallow and borage leaves and cut them coarsely. Cook in abundant salted water, drain and cool quickly in ice water. Drain again and squeeze them well, then blending the herbs in a mixer, with the marjoram, gradually adding the oil until you get a consistent pesto; season with fine salt and grated sheep toma cheese. Store in the refrigerator.
For the seirass, chop the cumin seeds and crumble the mallow and calendula petals; add them to the seirass and work it with a little extra virgin olive oil and spread it with a spoon on serving plates.
Prepare the ravioli: roll the egg pasta into thin sheets, cut into 4 × 4 cm squares, distributing the herb filling with a pastry bag. Bring plenty of salted water to a boil, boil the tortelli for 2 minutes, drain and season with extra virgin olive oil and transfer them to plates with the seirass.
Serve the tortelli, decorating the dish with fresh mallow flowers.