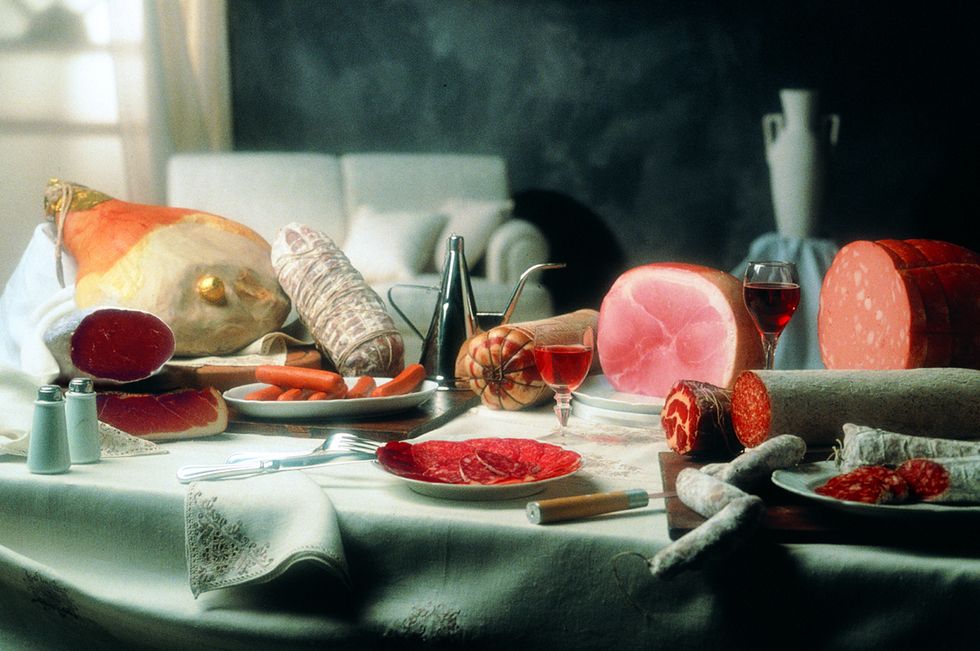 The raw ham is the one that contains the most of all, the mortadella the most "insipid". Salt is a fundamental ingredient for the production and conservation of cured meats and sausages, even if in the last twenty years its use has been significantly reduced, with peaks of 47% for pancetta. Here is the ranking of cured meats based on salt content and some tips to reduce their absorption at the table

The high salt content that characterizes cured meats, which, moreover, their relationship with this element has been written in the name, is an age-old question. It could not be otherwise, given that salt (ie sodium chloride) is the oldest and most natural preservative, already used by the Etruscans to extend the life of food, starting with meat. In the production of cured meats, salt plays an important role because it removes the water that would make microorganisms proliferate, regulates the fermentation processes of the meat and, together with temperature and humidity, determines the fermentation by favorable bacteria. However, today much less is used in cured meats than in the past and the percentage varies from about 4% up to over 45% depending on the product. And the cured meats that have reduced it the most in the last twenty years, according to Assica, are rolled pancetta (-47%), San Daniele Dop raw ham (-36%), Zampone di Modena IGP (-27%), pure pork frankfurter (-21%) and Bologna IGP mortadella (-20%). Given that it is not possible to produce cured meats without resorting to salt, not all these products contain the same quantities. Indeed, the differences are enormous.

Mortadella is the most virtuous

Looking at the ranking drawn up by the Nut / Cra Research Center for Food and Nutrition, which analyzed the sodium content of 32 delicatessen products, one is amazed: between the first and the last there is a 500% difference . In other words, the first on the list, that is the Parma ham Dop, considered the sweetest of the raw, provides 5 times more sodium than the last on the list, the unsuspected mortadella. In the first positions there are various types of raw hams and salamis, while among the most virtuous we find cooked cured meats, such as cooked ham, zampone, cotechino and würstel.

The explanation is simple: the more a cured meat has to season, the more it needs the antibacterial effect of salt. Raw ham matures for months (and sometimes for years) while mortadella is a fresh cured meat because it arrives in stores within three days of production. Furthermore, raw ham and salami are cured meats with few ingredients (meat and salt) and this makes it more difficult to intervene on them, while in the case of cured meats obtained from mixtures of several ingredients (such as mortadella and würstel) it is easier to dose the quantity of components, choose different cuts of meat and enhance the role of spices and aromatic herbs, both in terms of preservatives and flavorings.

Sodium and salt are not the same

The Nut / Cra ranking classifies cured meats based on their sodium content, which is a component of salt. In fact, sodium represents 40% of the weight of the salt. In short, to establish how much salt is consumed by eating ham or salami, it is necessary to make a small calculation considering that each gram of sodium is equivalent to 2.5 grams of salt. But there is also a shortcut: read the nutritional label on the trays of cured meats, where a few weeks ago it has become mandatory to indicate the salt content.

With fruit the salt goes down

There is no reason to give up the ritual of the Italian appetizer, the one in which slices of ham, salami, mortadella, loin dominate together with vegetables in dips, in oil and pickle and the inevitable curl of butter. As long as you consider it a single dish, perfect for a quick and easy meal, but above all delicious and surprising. And to lower the "salinity" just focus on fruit, because the water and potassium of which it is rich favor the elimination of the sodium present in cured meats. Why not try unusual pairs, such as cooked ham and pineapple or grapefruit, coppa and white grapes, mortadella and pear or berries, bresaola and avocado, salami and pomegranate or kiwi, speck and green apple, raw ham and mango or papaya, culatello and figs? In addition to diluting the flavor of cured meats, fruit provides fibers and minerals, and often also vitamin C, facilitating the absorption of the iron present in cured meats. Obviously, in the same meal it is better to consume unsalted bread, like the Tuscan one.

The reduction of salt used in Italian delicatessen products is due to many factors: the higher quality of the meats (which are now more mature and therefore less rich in water), the improvement of hygienic conditions in farms and cured meats, the adoption of more modern production techniques (such as cold technology), to control the drying and maturing periods and to pay more attention to the quantity and quality of the spices used.

The salt content of a cured meat also depends on the possible use of other preservatives, such as nitrites and nitrates. Today the former have practically been abandoned, while the latter have undergone a considerable reduction. Thanks to the use of the refrigerator and microbiological knowledge, respect for hygiene rules and exploitation of the bacteriostatic properties of spices and aromatic herbs, it is possible to produce cured meats that are always safe from a health point of view, but with better organoleptic properties and few preservatives.

As with many other foods, hams and sausages with reduced sodium content have also appeared in the salami counter. A welcome novelty for those who must pay attention to salt and must reduce its consumption. If there is an average of 2% sodium in cooked ham, the low-sodium one contains just 0.5-0.7%, while in the case of raw ham the reduction reaches 25-30%, without the taste being penalized. How is it possible?

Generally this result is due to an innovation in the production process: that is, to the replacement of part of the sodium chloride with potassium chloride (in the right quantity, otherwise bitterness prevails). This allows to maintain a correct binding of the muscle bundles and therefore to obtain soft and compact meat, but also to favor the elimination of sodium by the body. In the case of cooked ham, then, to obtain the same taste as always, some companies have changed the mix of spices used to flavor it, thus naturally compensating for the decrease in salt used. On the other hand, in the case of raw ham, the yeasts that develop on the ham during the 16-24 months of curing were also intervened.

Made in Italymortadellasalamesaltshamdietsupplymeats
coffee cake